Alannah Walton first rose to fame in 2018 when she was cast in the Victoria’s Secret Fashion Show. Now the Sydney native is lending her angelic good looks to Bean Body as our new Brand Ambassador. 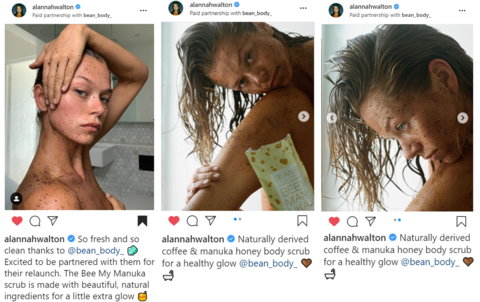 Alannah Walton had that pinch me moment that a million girls could only dream of when she was first discovered via Instagram DM. That was the sliding doors moment that catapulted the former professional swimmer onto the world stage as an internationally recognised model.

Fast forward to 2018, Alannah was cast in the coveted Victoria’s Secret Fashion Show straight off the bat, after just four days in New York. The fresh-faced 18-year-old was able to make that iconic runway her own, walking in the footsteps of Kendall Jenner, Gigi and Bella Hadid.

With an Instagram following of 124,000 and growing, Alannah has since appeared in Vogue Australia, Elle Australia, Vogue Japan and is now lending her angelic good looks to Bean Body as Brand Ambassador.

Known for her uncomplicated beauty routine, Alannah’s love for coffee scrubs and her easy-going lifestyle – where she splits her time between Sydney’s pristine beaches and the idyllic Southern Highlands of New South Wales – made her the ideal choice for the brand.

Touted as the bees knees, this sweet smelling scrub is filled with Manuka Honey, Hyaluronic Acid and Vitamin E to leave your skin hydrated and silky smooth.